No, this doesn't have anything to do with the great book "Shakespeare's Dog", just that we saw Shakespeare and dealt with our dog today. But maybe I'll get more Google hits.

Started out with a visit to the vet for Becky. We're starting a training class for her, and the school requires her to be current on all her shots before she can come to class (much like human children these days, I am told). While I was there, I did see a humorous poster from a veterinary pharmaceutical company depicting a cat staring at dirty footprints on the floor with a dismayed look on its face and the title "Look what the humans dragged in".

The dog got a clean bill of health, and we headed to class, where we got an awful lot of homework. The dog and I are going to be very busy for the next six weeks.

After class, CVH and I went to what may be the best Vietnamese restaurant in Louisville. Okay, so there's not as much competition here as in Houston, but this place is as good as any we ate at in Houston. When I eat there I feel like I'm right back in a little phở shop on Milam.

Then it was off to the Actor's Studio to see their production of Shakespeare's The Tempest. I probably read the play sometime in high school, but there's no substitute for seeing a live production. At intermission, CVH asked me how I liked it. 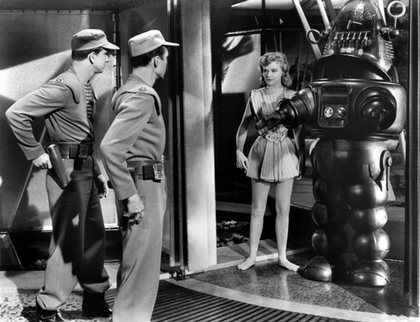 I said "Whoever wrote these plays was a great storyteller. But the people who made the science fiction movie Forbidden Planet sure stole a lot of material from this one. I was like 'Hey! That's Walter Pidgeon!', 'That's Anne Francis!', 'That's Earl Holliman!', and 'That's the robot!', but I haven't quite figured out who Leslie Nielsen is yet.";

Burning Down The House 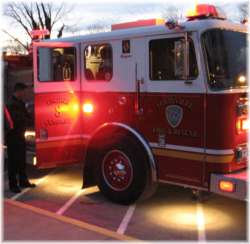 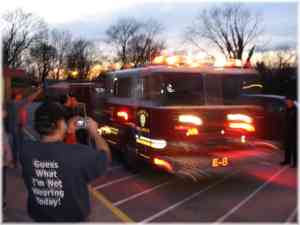 When I got back from the grocery store this evening, I saw that there was a fire truck in the parking lot of the church next door. I could quickly see that the fire department wasn't responding to an emergency, but rather they were entertaining what I assumed was the youth group with rides in the truck. They loaded up the kids and drove them around the parking lot with the lights on and honking their really loud horn.

I was so jealous.

When I moved here to Louisville a year and a half ago, I truly expected the winters to be like scenes from Doctor Zhivago. 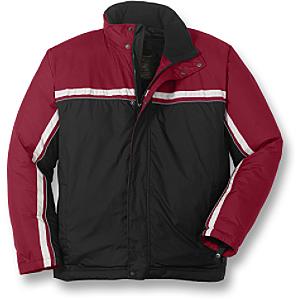 It has pockets for my hat and my mp3 player

So far, however, the winters, though dark and dreary, have turned out to be rather mild. It gets (and stays) below freezing some days, and we had a couple like that in December. Last winter I had the luxury of looking out the window in the morning, and if the weather was too cold, I just didn't go anywhere that day. Now that I have an office job and have to commute each day, the situation is different. One morning last month, when it was twenty-seven degrees outside, I showed up at work shivering in a sweatshirt and vest. My co-workers looked at me and asked if that's all I wore that morning. "It's all you need in Houston," I replied. So now I have an Eddie Bauer jacket for below freezing weather. It's filled with goose down, and very toasty. Amazing what they can do with technology these days. I bet those Russians would never have revolted if they had jackets like this one.

A Day of Two Celebrations

But one was sad.

There was a tiny notice in the newspaper this morning that the Eddie Bauer store at the mall was going out of business and everything was on sale. Well, I'm pretty much an Eddie Bauer kind of guy - especially since moving to this part of the country - so we hustled over there in the cold rain to see if I could find anything that fit (they usually don't carry a lot of items in my size). Although the mall was mostly empty, being after Christmas and lousy weather to boot, they were doing a brisk business at that store. I had pretty good luck finding stuff in "talls", and ending up buying everything I could find except for three items. I feel sorry for any tall guy who went this afternoon hoping to find something.

After that expedition we had lunch and headed over to the American Printing House for the Blind, where they were celebrating Louis Braille's 199th birthday. We had cake, sang Happy Birthday (remember that song was written in Louisville), and looked at biographies of Louis, but the main event was a Braille reading of nineteenth century children's literature. The original stories had been printed in Braille at the APH, but today's reading was done by Carla Ruschival, a retired Kentucky School for the Blind teacher and an active member of the American Council of the Blind. She didn't read from the original Braille texts, but rather from her Braillenote, a handy little electronic device that works much like a PDA, except that the display is replaced with a line of tactile pins that produce Braille characters.

A Whirlwind Tour of Valdosta 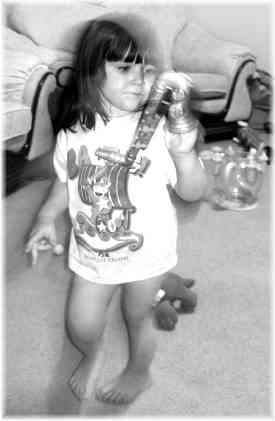 Wild Thing
We flew down to Valdosta, Georgia, for the weekend to visit the kids. I won't bore you with a lot of talk about how wonderful they all are (although I'd certainly be within my rights), so I'll just post a couple of pictures here of GC1, the wild saxophone player. 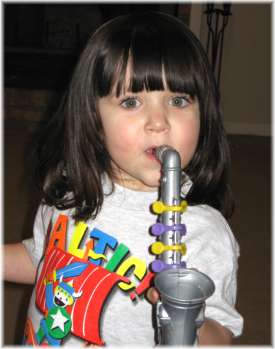 I will say that wheeled "carry-on" bags (many of which are now too large to fit in the overhead bins on most airplanes) have been responsible for one of the greatest aviation developments in the last fifteen years (right up there with those cute little tips on the ends of the wings): plane-side checking. No long waits at baggage claim, wondering if someone else has already taken your bag, or if your bag didn't make that tight connection in Atlanta.