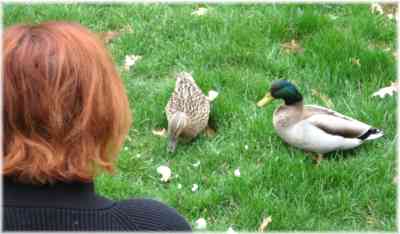 Spring is here, and the ducks are infesting our neighborhood. You hear their "quack quack quack" every morning and occasionally watch their funny little bottle shaped bodies fly in an ungainly fashion over the house, flapping their wings so wildly as to suggest that they're not quite going to clear the roof line. This time of year, however, it seems they just walk around a lot. They'll be in the driveway as you're trying to get to work and honking the horn doesn't do much good.

This afternoon a couple waddled into our front yard and CVH thought they looked hungry, so she grabbed some old bread and tossed it out onto the grass. They seemed to appreciate this very much. The squirrels next door watched the proceedings intently. CVH reports that the squirrels will come up to the window and peck on it while she's working at her desk. I wouldn't put it beyond them. 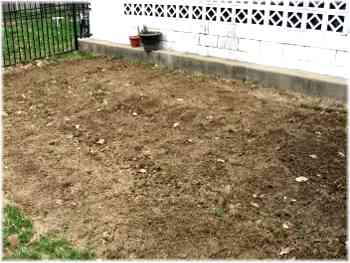 The Place: A suburban backyard in Louisville, Kentucky.

The Plot (so far): This three hundred square foot area of tilled earth. 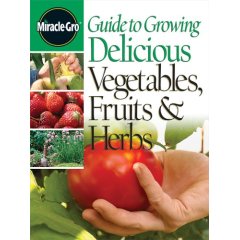 CVH has decided that this is the year for us (note use of plural pronoun here) to grow a vegetable garden. So we had a chunk of our back yard tilled under and bought this book. Now I find that I have a need for ten cubic yards of compost. I had tried making my own compost in Houston; I shredded all my leaves, tossed in all my grass clippings and the occasional banana peel, and turned it over at least once a month. After three years in the heat and humdity of Houston, all I had was a big pile of shredded leaves, grass clippings, and banana peels. Not having any other ingredients here, either, it's clear I'm going to have to find a commercial source of compost. But the exciting possibilites! What will we end up with this summer? A cafeteria for the squirrels? A $79 tomato? Stay tuned....

Song of the South 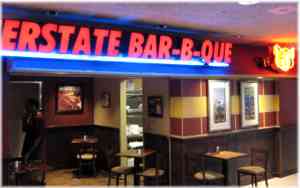 Last weekend, we took a rather hurried trip down south. Got up very early Saturday morning and flew to Memphis, where I had a pulled pork sandwich for breakfast at Interstate Bar-B-Q.

Then we made our way down to Magnolia, Mississippi. In the late nineteenth century, Magnolia was a popular summer destination for well-to-do New Orleanians who wanted to escape the miasma (and hurricanes) of New Orleans. They'd take the train about a hundred miles north to a place where it cooled off a little bit after dark. It's still a nice little town, and the famed train City of New Orleans still goes through, but it doesn't stop there anymore. So we flew. Northwest Airlines. They must be really hurting, because we couldn't even get water on the plane. I guess, they figured that, being Saturday morning, we were all flying on discount tourist tickets, and so we didn't pay enough to warrant drinking water. Rough. 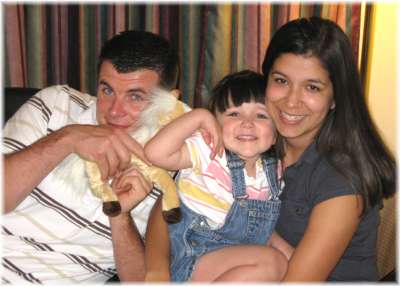 But once we got there, we visited with CVH's folks and Son's family. Son had driven over for the occasion. We also visited Percy Quin State Park and Kentwood, Louisiana, home of Britney Spears, and even drove past Britney's favorite Sonic drive-in, although we didn't go in. Son is seen here clowning with the stuffed horse that we got for his daughter at the Louisville airport.

On the way back, we got to eat barbequed pork ribs at Corky's in Memphis (CVH doesn't really care for barbequed pork, but she knows better than to ask for anything else when we're in Memphis, the barbeque pork capital of the world, as far as I'm concerned). And they did have water on the airplane, although we were restricted to one small glass (about three-quarters of a cup), no refills.

It's Snow Fun Without You

Last Thursday, the local weatherpeople started hooping and hollering about a storm heading our way that was going to drop three to four inches of snow on our town. I asked one of my co-workers if this was accurate, or if they were inflating the forecast, so to speak, and that we were only going to get flurries. "You don't know - they can't predict anything," he said.

I didn't have to go to work Friday, as they were doing some demolition work in front of the plant. The part of the building that I work in was built during the Chester Arthur administration (for real), and Management thought it best for safety if employees stayed home.

Friday morning it was perfectly dry outside. "Ha!" I said to CVH, "Look at that! Four inches of snow, indeed!" 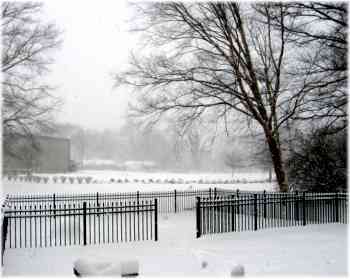 The lesson to be learned here is mock not the Kentucky Snow Gods. I swear, less than two minutes later, the skies opened up and snow started pouring down. It stopped that afternoon, after about four inches as predicted, but then started up again Saturday morning, giving us a total of about ten inches accumulation, the worst snowstorm in ten years. Where's Al Gore when you need him? 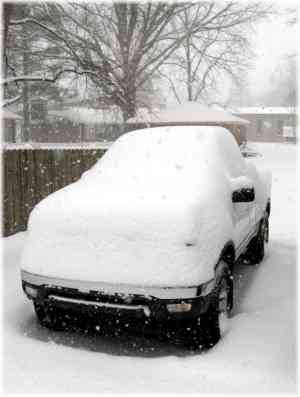 My poor truck never knew what hit it 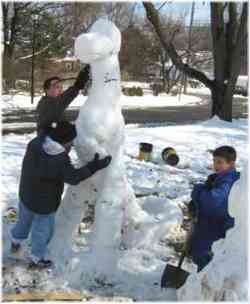 The family next door took advantage of the snow to build a dinosaur.

Today was forecast to be a beautiful day, so I looked to see what festivals or special events were going on. It's a little early in the season, so there wasn't much, but there was the seventeenth annual Maple Syrup festival at Leane and Michael's Sugarbush near Salem, Indiana. This is only about 45 minutes from Louisville, so I naturally thought "Maple syrup this far south?" But what the heck. The web site suggested wearing boots to the festival, so we stopped at Bass Pro Shops on the way and got CVH a pair of hiking boots. 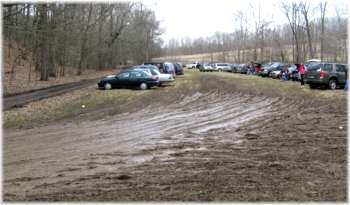 When we got to the festival, the parking lot was extremely muddy, and we saw why they suggested that we wear boots. We slogged over to the chow house, where they were serving a chicken dinner. The chicken had been roasted in a delicious maple sauce, and the baked beans were out of this world. Be aware, however, if the weather is nice, as it was, you'll stand in line about a hour for the meal. Afterwards, we visited the gift shop where we got some maple cotton candy (again, out of the world), but were disappointed that they had sold out of maple syrup. But as we were standing in line to pay for our cotton candy, a woman came up with two jugs of syrup.

"Where did you get those?" we asked.

"That girl over there - if you hurry, you can get some," she replied.

Sure enough, a young lady had just come into the gift shop hauling a box of twelve jugs of syrup to put on the counter. But people were grabbing them out of the box as she was walking! It was clear she wasn't going to make it to the shelf, where several people were standing, so I hopped in and got one of the last three.

Now, there's a reason why when you think maple syrup, you think Canada, or maybe Vermont - maple trees this far south don't produce much syrup. This whole maple syrup thing is really more of a hobby for Leane & Michael. Never did find out what their cash crop business is, though. I'll leave that to your imagination. 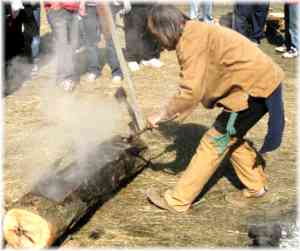 There was a re-enactor there who was demonstrating how aboriginal Americans (aka "Indians") rendered maple syrup by heating up rocks in a fire and dropping them into the sap to get it to boil. This was a lot of work, particularly for people who lived at basically a subsistence level, so that says something about how good it tasted. Especially, I guess, when you only have dried venison to eat the rest of the month. 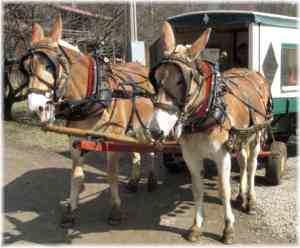 They had a mule-drawn wagon, which we did not ride. 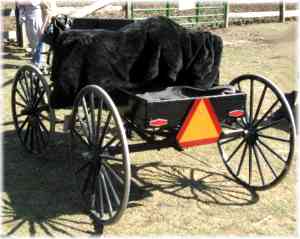 And there were a lot of people who came to the festival in vehicles not powered by internal combustion engines (of whom I would soon be jealous). Several had ridden their bicycles up from Louisville, a long and hilly route. While we were waiting for the tour of the sap production area (grove? farm?), I overheard some of the riders who were saddling up for the ride back asking among themselves about so-and-so or him and her. The usual response was "They're taking the van back", and I can certainly understand why. And then there were a large number of folks who showed up in horse-drawn buggies like this one. We'd passed some on the road into the festival. They all wore long dark clothes and hats (men) or headscarves (women). I don't think they were re-enactors. I mean, I'd seen "Witness", but this was the first time I'd seen so many out enjoying a nice day. Mennonites? Amish? Dunno. I'll have to do some research and get back with you. 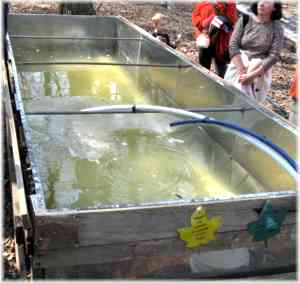 Sap right from the trees

The tour slogged us back through the mud to the sap production area, where they had seven to ten miles of plastic tubing punched into the trees that led back to vacuum pumps that emptied into this large vat here. The stuff in the vat was pretty tasteless; it has to be boiled down significantly to get the delicious syrup, which doesn't taste anything like Aunt Jemima's. 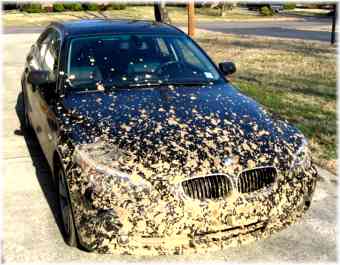 Muddin' in a German luxury sedan

Well, after the tour, it was time to leave. Our BMW is a nice car; designed by Hans, Dieter, Helmut and the rest of the gang to handle flawlessly at two hundred and twenty-five kilometers an hour on the Autobahn. In heavy mud, though, a front wheel drive Honda will beat it everytime. I learned that the car does not have a limited-slip differential. Nothing that a little water couldn't wash off, but boy, did we get some looks.