American Printing House for the Blind 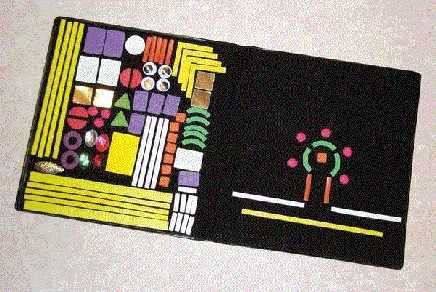 I visited the American Printing House for the Blind today. They started business in 1858 (they're older than the Kentucky Derby!), and they're the largest producer of braille and large print books in the U.S. But in addition to books and audio recordings, they also produce a wide variety of software and tactile goods for people with visual impairments, such as this Wheatley Diagramming Kit: a velcro book with a number of velcro shapes of various textures that allow one to quickly make a diagram that can be felt by a person with poor or no vision. 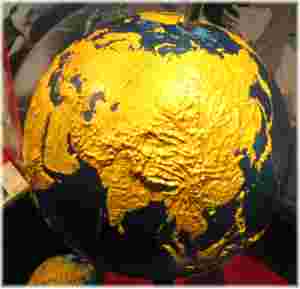 Or this large globe, with high-contrast colors and exaggerated relief.

They have an interesting museum there displaying all sorts of information about education and communication with people who are blind. 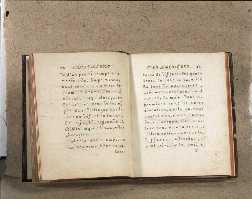 They have a copy of the first book produced for the blind. They discuss the braille system, and how various competing raised dot schemes didn't get standardised until 1932, about one hundred years after Louis Braille introduced his system (which he borrowed from a failed French Army attempt at developing a raised dot system and then modified). 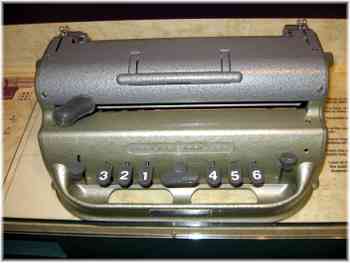 They display "typewriting" machines for producing braille, like this one, which I suspect are becoming less common among people who are only blind, and not blind and deaf, as computer reading software is getting better and better. For example, back in the seventies, I worked alongside a computer programmer who was blind, and the museum had one of the devices that he used, an "optacon". He put his finger in the machine at the place labelled "2", and held the wand (labelled "1" in the photo) over the computer screen, and it produced a raised image of the letter on the screen under his finger. These days, APH sells software that speaks the words on the screen through the computer's speakers, a much faster method. 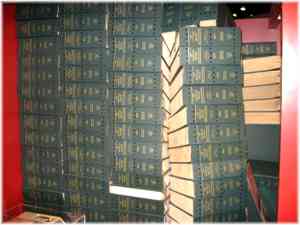 The museum had a copy of the first really big braille project they completed, the 1967 World Book Encyclopedia. It was something to see, realizing that they didn't have the computer scanning facilities back then, and every thing had to be manually copied over and then proofread by a braille reader reading it back to someone with the World Book in front of them to be sure it was accurate. 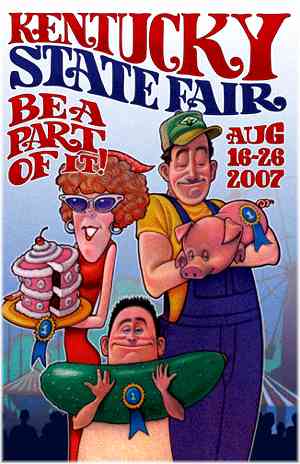 Another year has gone by, and once again it's time for the State Fair.

We first went to the agricultural exhibits, and saw the Largest Sunflower and The Most Perfect Ear of Corn, although I suspect that they both looked more perfect ten days earlier when they were fresh. We saw a working beehive and about a hundred jars of honey that had entered competition, and several dozen baked goods that had been sweetened with honey. It is difficult to bake with honey; I'm sure the winner deserved every honor bestowed. 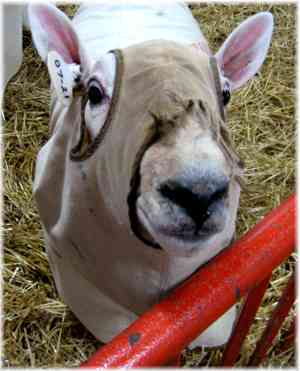 From the plant goods we quickly found ourselves amidst the sheep and pigs. The sheep were big, good looking, and this one at least, quite curious about me. 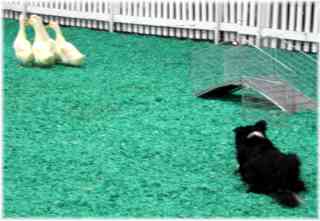 The cattle competition was going on that day, and we stopped to watch the entrants washing their cattle in giant shower stalls. Also setup in the cattle barn, for some unknown reason, was a sheep dog herding demo, although they weren't herding sheep, but ducks instead (probably to save space). The dog handler wasn't quite as impressive as James Cromwell in "Babe", but it was a fun show. 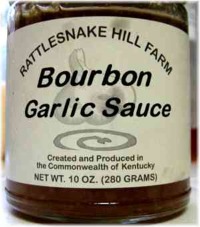 Thus fortified, it was off to the Kentucky Proud concessionaires. "Kentucky Proud", as I've mentioned before, is a program to promote food stuffs grown and packaged here in Kentucky, and member companies are allowed to label their products as such. We try to buy "Kentucky Proud" when we can, both to support local farmers and to avoid mystery food from who-knows-where (see my "Chinese Food" entry of 4 August). One of the companies that we bought from last year, Rattlesnake Farms, was here again. They specialize in growing garlic, and they produce a small line of garlic jellies and the like that are absolutely delicious. This year, they were featuring a new product; they took their Garlic Jelly (which we had bought at last year's fair) and replaced the vinegar with Evan Williams Bourbon Whiskey and come up with Bourbon Garlic Sauce. This stuff tastes fantastic, and because they weren't sure when they'd be able to get it out to the retail outlets, I bought a jar right then.

Next up was the trick dog show. This show was sponsored by Feeder's Supply, a local pet supply chain, whose stores also serve as adoption centers for cats and dogs from the Kentucky Humane Society. The KHS facility is so small that they'd never be able to handle as many animals as they do without the support of Feeder's Supply. The dogs featured in the show were all shelter dogs, and the show's message was spay/neuter and adopt from your local shelter. I was pleased with their mission, and enjoyed a great dog Frisbee show to boot.

At this point, CVH was getting a little tired of being out in the sun, and wanted to go inside where there were hundreds of promotional booths, so in we went. The various Kentucky law enforcement agencies had set up a little town with tricycles for small children. At first, CVH thought that there was going to be a tricycle race, but I pointed out that was hardly the type of activity that the police were likely to promote, and sure enough, once the kids took off, the officers were there to explain that they had to stop for stop signs and lights and signal their turns and so forth. I thought it was a great idea!

The most surprising thing was the number of free medical screenings that were available; this more than covered the fair admission cost right there. There were screenings for prostate cancer, mammograms, hearing, vision, skin cancer, dental sealants for kids, bone density checks, and a blood drive. The Epilepsy Foundation and SIEGE, a support group for people with seizure disorders, also had booths. 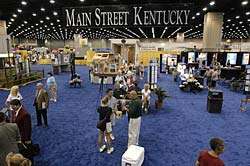 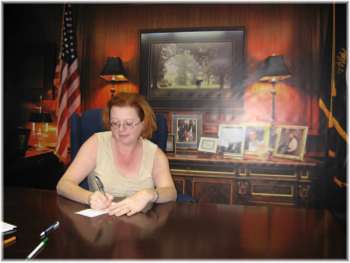 Then there was Main Street Kentucky, featuring a variety of governmental and nongovernmental organizations such as AARP (I am a card-carrying member now), the Louisville Weather Forecast office, the Metropolitan Sewer District (which gave us a quart bag of fertilizer that they make from - well, I suppose you can guess what they make it from), and the Governor's Office, which provided this mock-up of His Honor's office so CVH could be seen signing some important bill into law. 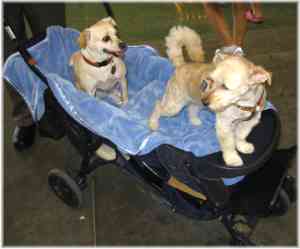 We also saw a fair visitor pulling a baby carriage with his two dogs around the exhibits. 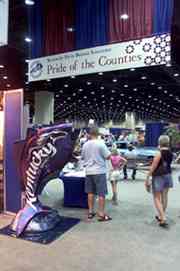 The Pride of the Counties area gives counties across Kentucky an opportunity to tell the story of how they're special (and to get you to come visit and spend money there!). We got information on Mammoth Cave tours, bicycle tours across Kentucky, State Parks, lakes, Civil War battlefields, and all sorts of other recreational and historical opportunities in our Commonwealth. One of the counties, I don't remember which, promoted their kangaroos. 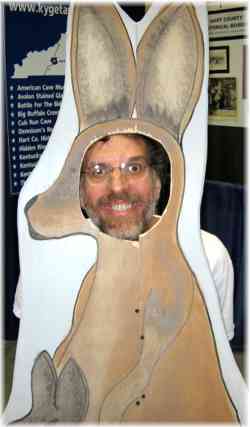 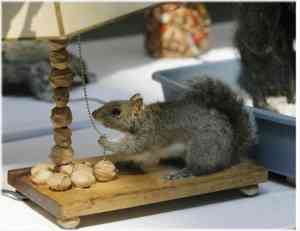 Then there was the Kentucky's Ugliest Lamp Contest. Believe it or not, this was not the winner. 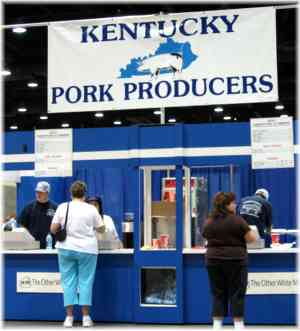 Finally we went through the commercial exhibits, but first we got a pork sandwich from the Kentucky Pork Producers. We looked at hot tubs, sheds, bought some of Ben's Mustard, and were taken in by a barker selling a (supposedly eco-friendly) pet hair pickup roller. It's a sticky roller, just like regular lint rollers, but when you put it in warm water, it becomes slick, and the hair just falls off. When dry, it's sticky again. So far, it has worked as billed. We'll see how long it lasts; we hope at least a year until we can get back to the Kentucky State Fair once again!

Today I had to fly to Houston on business and two young women, who appeared to be their early twenties, were sitting behind me on the airplane. They spoke loudly and non-stop for the entire flight and their conversation sounded similar to this, and I assure you that I exaggerate not:

Believe it or not, this is true; and it went on like this for two and a half hours. If I'd had a baseball bat, I might not be sitting here typing this, but rather awaiting arraignment in Dallas. Probably another good reason to not allow baseball bats in your carry-on bag.

View of track from Millionaire's Row

I volunteered to help set up a fund raiser for the Kentucky Humane Society today. It's held at Churchill Down's fabled "Millionaires Row". It didn't seem likely that I'd ever get another chance to see Millionaire's Row, as it's a six hundred dollar minimum (but you can bring up to fifteen friends, and that includes lunch). People there do have a nice view of the track, and of course they don't have to go outside to place bets like hoi polloi. But the most amazing thing was a giant crystal reproduction of the Churchill Downs main building in crystal. It must have been twenty feet long, with hundreds of little crystal people and an entire field of crystal horses racing down the track. I can't imagine what it must have cost.

We entered a painting in the Fine Arts competition at the Kentucky State Fair today. 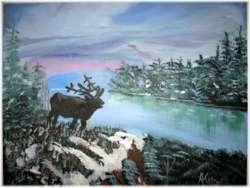 Well, the painting wasn't really ours, it was painted by a resident where CVH works, but of course this resident couldn't take it to the fairgrounds, so we took it for her. 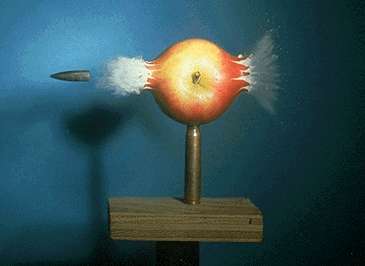 After dropping off the painting, we visited the Speed Art Museum, which was much nicer than I had expected. We were there to see the photography exhibit, a traveling collection from the Eastman House. This is an exhibit that I can definitely recommend! You'll see Matthew Brady's portrait of Lincoln, several strobe photographs by Doc Edgerton, the eeriest World Trade Center photograph I've ever seen, and Dorothea Lange's "Migrant Mother" (both the original and the retouched - I'll bet you didn't know either). 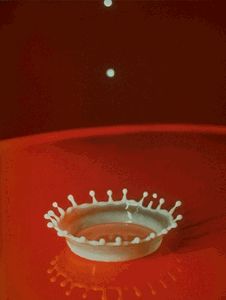 Many years ago, I was wandering through a building, and came across a hallway with dozens of strobe photographs lining the walls. I recognized them immediately as Doc Edgerton's, but I didn't recognize the man who came up behind me and started asking me questions about what I was looking at. He was, of course, Doc himself; I had wandered right outside his office. He was a gregarious fellow, invited me into his office, went on at some length about his work, and before I left he gave me several copies of this Milk Drop photo.

Went the to Kroger today. Spent one hundred and ninety dollars.

Making a trip to the grocery store is taking longer than it used to because we now check all packaged food to see if it comes from China. If you haven't done this yourself yet, you might be surprised. Not a big shock that the Kroger cat litter is coming from China, but Del Monte pears in light syrup? Yep. Dole Mandarin Oranges? I guess "Mandarin" is the key word there. And all those items "packed in the U.S.A."? Well, who knows where they came from first.

I don't know how you could possibly keep all Chinese ingredients out of your kitchen without drastically modifying your shopping habits. We plan to continue to patronize our local produce markets, buy "Kentucky Proud" (the state Agriculture Department's program to promote Kentucky-produced foods), read labels, and choose Kosher when we have a choice. Some of those great bargains at Aldi no longer seem such a great bargain. We might even get around to putting in that garden we've been talking about for months.