Yesterday CVH went to the church to help with the annual Holiday Bake Sale. She mixed and rolled and wrapped.

Then, this morning, we braved the "wintry mix" to go buy some of the delicious wares. Now, I had always thought that a "wintry mix" meant mulled wine followed by rum and egg nog, but here in Kentucky it means "snow, freezing rain, and sleet, all at the same time". Very cold and yucky. 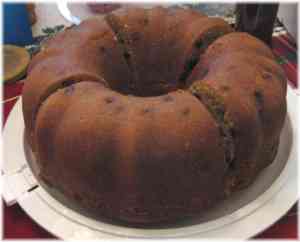 But it was worth it when we got to the sale. Due to the weather, very little had been sold already, so we were able to score some real treats, including this pumpkin-bourbon cake. (Bourbon and pumpkin? You know you're in Kentucky.) 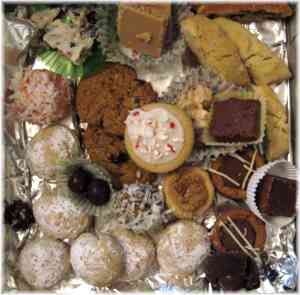 Not to mention a jar of Henry Bain sauce. Around the turn of the 20th century (supposedly), the maitre d' of the Louisville Pendennis Club, Henry Bain, developed a sweet and spicy sauce to deal with the gamy taste of their game dishes. It's a heady combination of tomato sauce, chilies, chutneys, anchovies, and who knows what all. That's the pumpkin cake again in the background, along with the cheese ball that we bought (hey, we could be snowed in all winter).

When we got back home, CVH cooked up a pot of hot and sour soup to ward off the chill. It filled the house with such a wonderful aroma of vinegar and chicken broth and tofu and fungus that I was moved to sing "It's beginning to smell a lot like....Tet."

It is winter here in the Midwest

Well, nobody moves here for the weather.

The view out the window this week 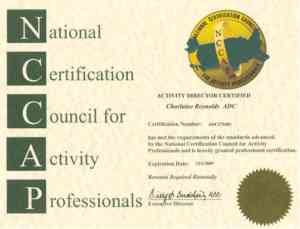 But CVH was thrilled to get her National Activity Director certification. She has put in years of work to get this.

Today I made a batch of really good and really easy pulled pork. You too, can duplicate these results, although the closer you live to Louisville, the easier it's going to be.

First, get a pork roast. Preferably from a Tennessee or Kentucky pig. They just taste better, I don't know why. If you're going for grocery store pork, Kroger usually has the better pork (although some people think the pigs may be mistreated). Today's roast, though, came from Meijer's (a midwestern chain), as they had some "must sell today" roasts that were deeply discounted. 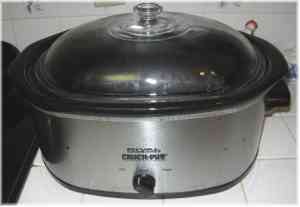 First thing in the morning, toss that roast into your Crock-Pot with about half a cup of water (white wine would really be overkill here), and put it on low. This works best if you're going to be out of the house for the day, else the smell of the pork will drive you crazy and make you eat all kinds of snacks because you think you're hungry. 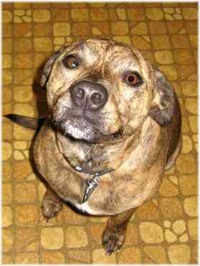 Ten to twelve hours later, depending on the size of the roast, take the roast out. Save the juices for the dog. Pick off the fat chunks, and save those for the dog, too. 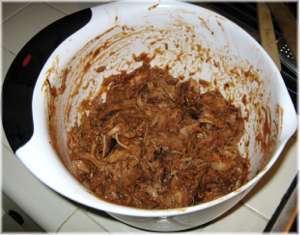 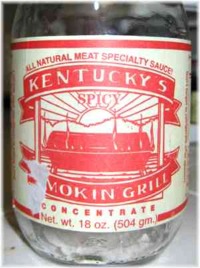 Pull the pork with forks, wooden or whatever you have, and put it in a bowl. Discard gristle and anything else that you don't want to eat. Then stir in some Kentucky Smokin Grill sauce. This is some of the best stuff to come out of a jar that has even been made. And it's a Kentucky Proud product! If you want to "sex it up" a bit, you can stir in a little of Chef Howerton's apple rosemary viniagrette sauce, too. 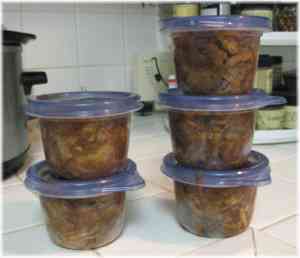 Then put the results in little sandwich-portion containers and drop in the deep freeze. Put one in your lunch bucket along with a couple slices of bread, a kaiser or onion roll, and you're set!

Because I've found out that someone else is reading this blog.

Yes, my first reaction was to think of that classic Chas Addams cartoon:

But don't turn around - there's no one standing over your shoulder. The explanation is simple: at church today we had a celebration lunch after services. The pastor sat at our table and mentioned to me that I had a great blog. He said he didn't know how I found the time and energy to do it. It wasn't clear to me whether he meant where did I find the time to do all the things that I mention in this blog, or find the time to write about them. I told him that I think some natives here take Kentucky for granted, and perhaps it's my fresh look at everything the state has to offer that drives us to take the time to enjoy them. Plus I'm finding it important to write this stuff down, as it's gettting harder and harder to remember things these days.

Me and the Candy Machine

In seventh grade, I got D's and F's in math.

A while back, I got hungry at work, and decided to go down to the candy machine to see if there was anything that I would like. I had a dollar bill, a quarter and a nickel. I decided that I wanted the trail mix, which cost 70 cents. I put in the dollar bill, and punched the code for the trail mix, and the machine told me to use exact change. I got my dollar bill back, and was about to leave when I wondered why did it take my bill in the first place. I looked at the machine again, and saw that there was a 'use coins' light, but it wasn't lit. Hmmm...maybe it just can't make 30 cents change because it's out of nickels and dimes. So I put the dollar bill back in, and selected the 50 cent potato chips. Out come the potato chips, with two quarters. Well, it had quarters, but it couldn't make 30 cents, so it must not have a nickel, 3 dimes, or neither. Since I now had three quarters and a nickel, if it had one dime, I could get the trail mix. I put in the three quarters, but it wouldn't take my nickel - it kept spitting it back (strange, if it's out of them). Then I noticed there wasn't anything in the machine that cost more than 70 cents, and I had already put in 75, so maybe that's why it wouldn't take anymore. I tried the trail mix anyway, and it couldn't make change, so now I knew for sure that it didn't have a nickel. So I got my three quarters back, put the nickel in first, then the three quarters, selected the trail mix, and voila, trail mix and a dime!

So I know that my seventh grade math teacher was in the wrong line of work.


Categories: Things You May Find Interesting

Today the folks at the Jefferson Memorial Forest had an open house. You may recall that we last visited the forest in May, when they had their bluegrass forest festival. This time they had their welcome center decorated for Christmas, with a Chistmas tree, a roaring fire in the fireplace, and candies, cheeses, cookies, crackers, cider and coffee. Yes, you do pay high taxes here in Louisville, but once in a while you get some of it back.

The Jefferson Memorial Forest (part of the city's park system) is a lovely place. Located just outside the "Gene Snyder" (the outermost of the two main freeway loops circling the city), it's 6100 acres of woodland that was originally set aside after WW II to provide a peaceful place to remember those servicemen who didn't come back.

When we visited in May, we walked one of the trails that turned out to be rather pedestrian, but I discovered today that they have some real hiking trails. I trekked part of the Siltstone trail, rated "strenuous", and although I thought that was a bit of an exaggeration, I did get a good workout. The hills are between two and three hundred feet high, so every mile you're going up and down the equivalent of a twenty to thirty story building. That is, a building where the stairwells are covered with tree roots and slippery leaves.

Leaves. Lots of leaves. There are an amazing number of leaves in this part of Kentucky. I asked at the welcome center if they had an estimate of how many leaves were in their forest, and they just looked at me like I was crazy. Intending to come up with my own estimate, I asked them if the 6100 acre figure was for the actual surface area, or just calculated from the borders, assuming it was flat. They didn't understand the question. I tried to explain that if a giant hand came down and flattened the forest, it would squish out well beyond its current borders, and did the 6100 number take that into account? They didn't know, and started to back away from me at that point.

So, assuming that the 6191 acres (I looked up what is supposed to be a more accurate number) is the actual surface area, we can count the number of leaves in a square foot and multiply that out. In the area that I hiked today, at least, it appeared that the fallen leaves were more or less evenly distributed over the surface, so I made that simplifying assumption. I didn't bring a ruler with me, unfortunately; I'll have to go back with one; but I estimated a square foot and counted the number of leaves that appeared to have fallen this season (skipping those that looked like they might have been left over from last year). The number was twenty-eight (I told you there were an awful lot of leaves there). Using the calculator at online.unitconverterpro.com, I came up with about seven and a half billion leaves for the forest, which I figure is within a couple of orders of magnitude one way or the other. Some more research is called for; I need to find a arborist who can help me out here, as well as a surveyor who can tell me how the acreage numbers are calculated. Click the "Comments?" link below if you think you can help.

The nice people at the forest did tell me that there was a "master plan" to connect the Otter Creek park with Jefferson Memorial and the Bernheim forest so that wildlife, at least, could travel seamlessly (that is, without crossing the freeway) from Ft Knox all the way to Clermont. Apparently the Bernheim people had brought up the idea of building a wildlife bridge, an earthen arch, over Interstate 65 to allow this, but it was shot down by some interest or another. Now the various parks may band to together to raise the idea again. I find it fascinating, especially if it just keeps the deer off the freeway.