Today we attended the annual meeting of the Kentucky Community Farm Alliance (CFA). The CFA is a curious amalgam of people interested in the viability of family farms. The core of the group lobbies legislators in Frankfort for legislation friendly to family farms, including getting more family farm food in school cafeterias. Along the way they have picked up proponents of other objectives, including local food and organic food advocates, and those working to provide food to the "food insecure" (i.e. those who have trouble affording their groceries). Lately they have been promoting "Community Supported Agriculture", or CSA, a sort of adopt-a-farmer program where two or three dozen people buy "shares" in a farmer's projected harvest. They pay the farmer at the beginning of the season and get their share of his crop each week, be it good or bad. This shifts some of the risk from the farmer to the eater, providing some small scale farmers enough economic security for them to stay in the farming business. This same model is also used by charities that want to provide fresh produce to the “food-insecure”. I'm not sure how this model would scale over time.

The conference was held at Kentucky's Blue Licks Battleground State Park. Blue Licks was the site of a salty spring which attracted mammals for thousands of years (not sure where the “Blue” part of the name came from). Woolly mammoths trod a path from the Ohio River to Blue Licks, a trail later followed by the buffalo. Early settlers came here to make salt, and the followed the same trail, or “buffalo trace”. A skirmish late in the Revolutionary War gave it the “battlefield” part of its name. In 1782 the British were still harassing settlements in Kentucky and elsewhere. When Daniel Boone, Trigg, and their men showed up at one of these besieged settlements that summer, they found that the British had slipped out the night before, headed for Blue Licks. Boone and company followed them to the river crossing just before the Licks. The British and their Indian compatriots had already crossed over and taken a position on the high ground above the Licks and the river. After some debate, Boone and the other Kentucky officers decided that they had come this far and they might as well attack.

Now you might think that crossing a river to charge uphill against an entrenched enemy that outnumbers you is not be the smartest idea, and you would be correct. The Kentuckians were ambushed. Daniel Boone's son Israel was shot and killed in front of him. Seventy Kentuckians were felled during the short battle and subsequent retreat. It was the last battle of the Revolutionary War.

Much later, in the nineteenth century, enterprising businessmen sought to capitalize on the supposed health benefits of the water from the Blue Licks spring. It was sold in bottles, and eventually a five hundred room hotel was built to serve the well-to-do who came to partake of the waters in person. The hotel burned down and about a hundred years ago, after who knows how many tens of thousands of years, the spring dried up. One of the property heirs or leinholders donated the land as a state park and here we were. 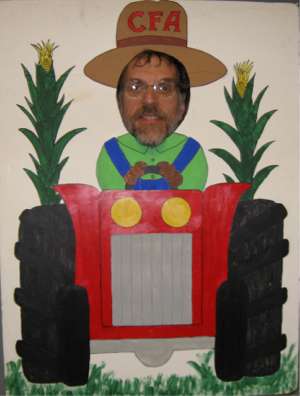 But none of this was discussed during the CFA meeting. We did have an absolutely delicious lunch of local food, locally prepared: potatoes, tomatoes, collard greens, buffalo stew, apple cobbler, biscuits and corn bread.

There was a fun “food quiz” during lunch – see how you do on a few of the questions that we were posed (hover your mouse to the right of the question to see the answer):

Sunday morning I awoke early and walked up to see the monument to the Kentuckians who died in battle that day so long ago. A friend of mine who is a Civil War buff told me that you have to go to the site of a battle to really understand what happened there - “You gotta walk the ground” he always said. And indeed it was an experience to walk the path that woolly mammoths and British soldiers and Daniel Boone walked, and see the ravines where the Indians laid in wait for the hapless Americans. It reminded me of the time that I visited Washington-on-the-Brazos in Texas and walked the very same road that Davy Crockett did on his trip to the Alamo. His first and last trip, as it turned out. 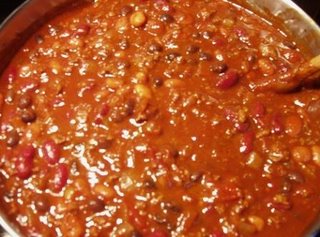 As part of their annual volunteer appreciation event, the Kentucky Humane Society sponsored a chili cookoff today. CVH and I entered a huge bowl of chili, and won the competition! To be sure, CVH provided the expertise, but she said some of the credit belonged to the quality of the cumin that she used; it was Penzey's cumin (I guess I should put a paid link in here!). The most important thing, though, is to know your audience. You have to give the judges what they're going to want if you expect to win, of course. 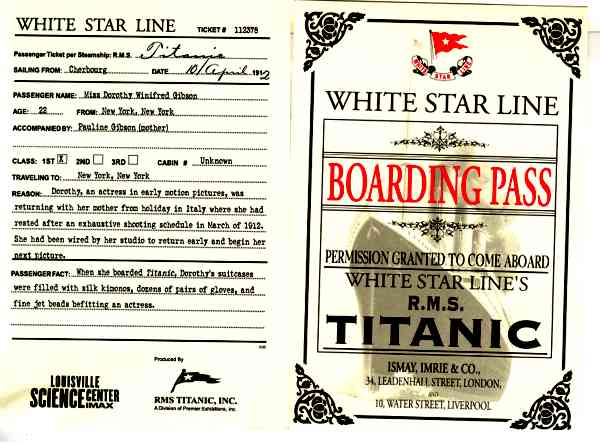 We went to the farmer's market this morning, and it was cold enough that we thought that we might have to dodge icebergs. This particular market has announced that it is going to be open "year 'round", and a lot of farmers had indeed gotten up in the cold and the dark to bring their wares into town. We were able to get potatoes and a some of the very last of the corn and tomatoes (snif), as well as local buffalo from the Kentucky Bison Company. We'll see what happens when there is snow on the ground.

After the market we went to the Louisville Science Center and saw the exhibit of Titanic artifacts. Everybody gets a "ticket" upon entering the exhibit with the name of an actual passenger, so you can see what sort of accomodations you would have enjoyed and if you would have survived the disaster. CVH was lucky enough to get Dorothy Gibson, a famous actress traveling first class. She escaped in lifeboat 7. I got a second class male who didn't make it. I am now 0 for 2 at Titanic exhibits.

The company that puts on the exhibits, RMS Titanic Inc, has five or six of these exhibitions touring the world at any given time. The one here in Louisville is one of the smaller exhibitions, but it still had a good representative selection of artifacts on display. Unlike the last exhibit I went to, however, this one did not have a gift shop; there were only a couple of Titanic related items for sale. Not sure why that would be so.

A Day at Churchill Downs


Today was the annual Louisville Computer Security Conference and it was held at Churchill Downs. They were taking out a few horses and running them around when I got there. Disney had announced that they would be filming a movie about Secretariat at the Downs all week, but we found out that they had wrapped up early and left the day before. So I didn't make it onto the screen with John Malkovich.

Churchill Downs was a surprisingly nice place to have a conference; a good audio system, (relatively) comfortable chairs, good staff, and plenty of video monitors. About the only complaint I had was that there were no clocks whatsoever.

The original objective was to drain the swamp

Have you ever looked at twenty-one pounds of produce stacked up on the kitchen counter? "Now what?" is a real question. So far I have two gallons of eggplant pasta sauce simmering on the cooktop. And that barely made a dent in the eggplant pile. Looks like I'll have to sponsor a caponata festival or something.


Perhaps the garden senses that summer is over and the first frost is soon around the corner. In any event, it has certainly put out a burst of fruits this week. I've harvested over twenty-one pounds of okra, green red and yellow peppers, banana peppers, jalapenos, and eggplant the last two days.

Now I just have to figure out what to do with all of this bounty. Two gallons of eggplant pasta sauce only makes a rather small dent in this harvest.