It was hot this weekend. And humid. And, like all our Texan friends know, that means it's time for a margarita.

So off to the local package store we go. We enter, and this being Kentucky, not Texas, the first thing you see is the "Wall of Bourbon". Dozens and dozens of different brands of bourbon. Next to that was a little tiny section, just three short shelves actually, of tequila. There were two we recognized, Cuervo and Two Fingers; the others looked like they might be better suited as degreasers. Which to choose? I looked at the back of the Two Fingers bottle, and although the tequila is made in Mexico, the distributor is headquartered just outside of Louisville. The principle of "buy local" solved the dilemma.

And the margaritas hit the spot.

Off we went to Trappist, Kentucky to visit the Abbey of Gethsemani. This, the first abbey in the United States, was established in 1848. (Some nuns who were already here in Kentucky though it would be a good place to put one.) The monks lead a very simple and quiet life, reading the Bible and praying. Thomas Merton lived here, and we met a monk who arrived at the abbey in 1940 and knew Merton personally. They work a few hours a day, either doing chores or making cheese and fudge. The cheese and fudge they sell to keep the lights on. If you need to get away from it all they will put you up for the weekend and leave you alone, but you are expected to be quiet.

We had more questions for the monks (How many live here? Do you read newspapers? Were you bothered during the Civil War?), but it was lunchtime and they had to hurry off to Sext. 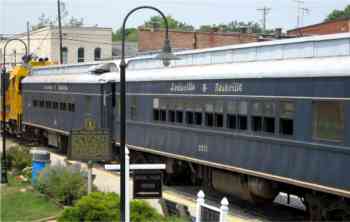 Our train to Boston and back

So we went a couple of miles down the road to the Kentucky Railway Museum to see their trains. When I went to pay our fee the cheery volunteer talked me into buying tickets to Boston on a train that was leaving in about five minutes. The ticket clerk was pleasant, we didn't have to take off our shoes, and the coach car was more spacious than any first class air cabin I've been in, even though it was built in 1930. We arrived in downtown Boston, Kentucky - which consists of one (1) minimart - and got water and ice cream and pickles to cook off with while we waited for the train to turn around. Gazing out the window as we rolled through the Kentucky countryside, I could almost imagine what it was like travelling across the country like that seventy years ago.

Unfortunately, the train ran late (that part was modern), and by the time we got back to the museum, it was closed and I didn't get to see any of the exhibits.