Springtime for Conrad and Louisville 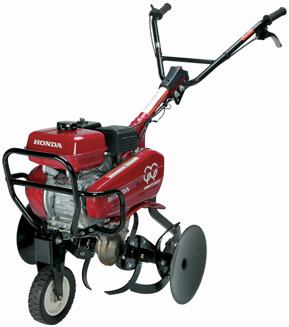 The weather is finally turning springlike here. I rented a rototiller this morning to breakup the garden. They were out of the little one that I rented last year, so I went for the "medium", a Honda FC600A. They had to use a lift to get it into my pickup. (I think you must have to have a trailer for the "large".) I'm guessing that it weighed north of a hundred pounds. I wrestled it around the garden for about an hour (a real aerobic workout), and it did a much better job than the little one did last year. But then came the time to put it back in the truck. I went around the street to see if there was any young dude available to help, but nobody under 40 was home.

So I sat and stared at the tiller in the driveway for a while until I thought "What would the ancient Greeks have done?". About ten minutes later, I had it in the back of the truck. My wife came out and asked if I had found someone to help, and I said No, I did it by myself. I told her I did it the way the ancient Greeks would have. She said You mean with the fulcrums and stuff? I replied that I did not get into MIT on my good looks.

We returned to the Red Pepper Chinese Cuisine restaurant today for lunch, and had a few more of their “authentic” Chinese specialties. We still highly recommend this restaurant to any of our Louisville friends.

We enjoyed the Dragon Won Tons so much last time that we ordered them again. Then we went for the Mouth Watered Chicken (口水鸡): bits of dark meat chicken swimming in a lightly spiced bowl of sauce with scallions and peanuts. CVH decided to try the Pickle Pork Stomach Soup (酸菜肚丝汤) which was absolutely delish, and we highly recommend it. For our entrée, we selected the Cumin Lamb (孜然羊), a wonderfully spicy and aromatic dish of peppers and onions and lamb. CVH said that she saw the chef set it on fire twice in the kitchen.

We will go back!

Today I did some volunteer work for the Kentucky Humane Society at the “Kentuckiana Cluster” dog show. It's a surprisingly large show, considering the size of Louisville. Over 3,500 dogs were competing over four days.

During my break, I was able to walk around and see some of the competition. I happened to arrive at one wing just as the Bedlington Terriers were starting to show. It seemed as if there were hundreds of Bedlingtons there – Bedlingtons as far as the eye could see. Apparently it is a very popular breed in this part of the country.

The Facts May Be Different in Texas

Most of you probably know that we publish a lot of textbooks where I work. Today I came across a copy of this one, and I just had to share it with our Texas friends. You'll be glad to know that your facts are being to taught to your children. 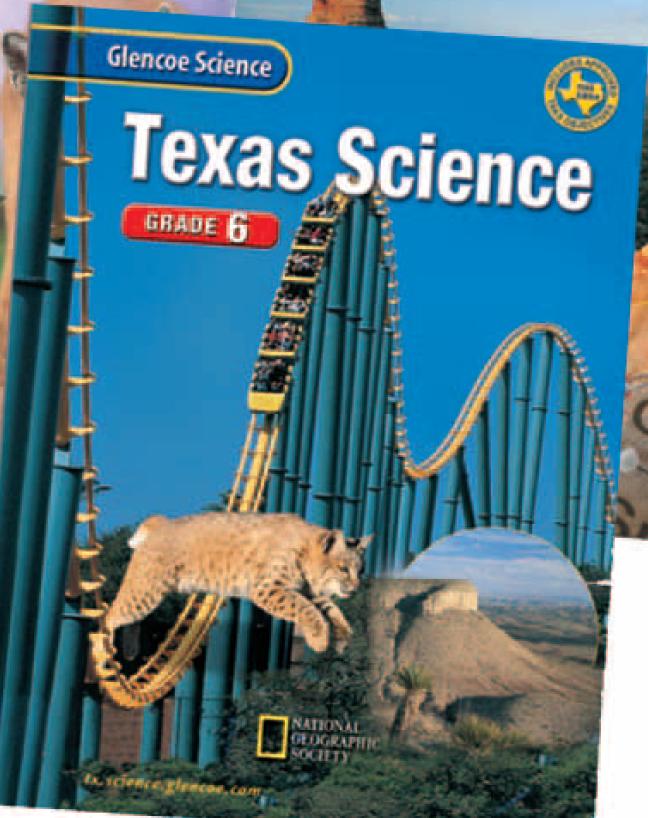 It was a beautiful day today, sunny and it got up to about seventy-five, making it the first day of the year that you would actually go around all day in a T-shirt.

I should have started working on my taxes, but it was just too nice to stay inside. So we hopped in the car and headed out to Frankfort. We walked around the Capitol grounds, and then visited the Rebecca Ruth Candy factory. This is a third generation family business that produces primarily chocolate candies. Their most famous is the Bourbon Ball – Ruth Booe claims to have invented the Bourbon Ball. They make quite good bourbon balls. They make different versions – the basic ball is made with Evan Williams, and there is a premium version made with Buffalo Trace (which I think is a bit of a waste of Buffalo Trace, but if that's what you really want...). 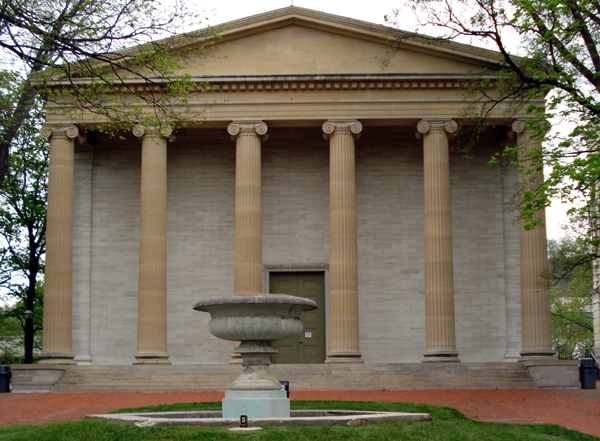 The Old State Capitol of Kentucky

Then we visited the Old State Capitol of Kentucky. Designed by a twenty-five year old architect, Gideon Shyrock, it is an architecturally interesting place, and definitely worth a visit. You'll be impressed by Gideon's cupola and the freestanding curved staircase underneath it. It's a little confusing when you arrive, as it's not immediately clear where the front of the building is – the front face having no fenestration whatsoever. The Capitol was completed in 1830 and served as the seat of Kentucky government until 1910, harboring both Union and Confederate soldiers along the way. According to our tour guide, the capital was easily taken by the Confederates, but then reinforcing Union troops were dispatched by train from Louisville. When they got this news, the Confederates burned a key bridge, forcing the Union soldiers to march well out of their way. The rebels are just about to inaugurate their new governor when the Union guys showed up and started shelling them. The Confederates retreated to Perryville, where a bloody battle ensued. But that's a topic for another day.

The Old State Capitol is also the site of the only assassination of a Governor in the US. The election of 1899 was very close; the loser asked for a recount; the recount showed the loser was the winner; the now-winner shows up at the Capitol to claim the title and is hit by a sniper's bullet. He's carried across the street to a doctor's office and sworn in on his deathbed. There's a re-creation of the scene in the doctor's office across the street, too – be sure and see that. The tour guide has lots of stories; you get your four dollars worth.

Especially since those four dollars also include admission to the Kentucky History Museum a block down the street. Being the Lincoln Bicentennial, they had a special exhibit on ol' Abe. They displayed Lincoln's razor and pocket watch, not something you see every day. Of course, there was also a lot of background information on Abe and quite a bit on the Todds – we learned about that socially prominent Lexington family that clearly gave Lincoln a leg up in his political career.

By this point, we didn't want to stay inside on such a nice day any longer, and proceeded down the road to the Salato Wildlife Center. There was a herd of people there on this warm sunny day. We saw a couple of Bald Eagles, bears, wildcats, a whole bunch of Kentucky fish, and most fascinating to me, a beehive. They had it cutaway so that you could see what was going on inside the hive. All those bees coming and going and making comb and tending to the queen bee - it's always amazed me. I'd like to think that people could be so productive working together, but I guess it would take the same sort of extreme socioeconomic stratification to accomplish.