I'm not suggesting that you try this at home, but...at the very end of last year I was sitting at my desk waiting for a computer program to finish running when, for some unknown reason, the name of my high school Physics teacher suddenly popped into my mind. "Boy, he was a good teacher," I thought, "I wonder if he stuck with it?"

Since he was fairly young at the time, I called up Google, put in his name and the school name, and look at that! A picture of the school's science department, with him still quite recognizable, although a bit greyer, of course. The caption instructed me to click on a head, and when I clicked on his, an email form opened, addressed to him. I wrote a short note, letting him know that I remembered the great job that he did, and I expressed my admiration for him sticking with it all these years.

I was a little surprised when I got a "thank you" reply from him, but nearly fell off my chair when he put something in the note which indicated that he remembered me personally! I mean, of all the many* students has he taught Physics to in the intervening time, he was able to reach back thirty-five years and pluck out my name. And it's not like he had anything to go on, for example, as if he could have Googled my name and found that I had coauthored a seminal paper on anisotropic Beta decay or anything. I wasn't that good (or bad) a Physics student to be so memorable, except, in this case, to such an exceptional teacher.

*Making the simplifying assumption that the high school science day still consists of seven or eight periods, and further assuming that, as Department Head, he teaches approximately four periods a day, then if there were twenty students in each class, we arrive at the figure of eighty students a semester. Two semesters a year for thirty-five years gives us five thousand six hundred students. 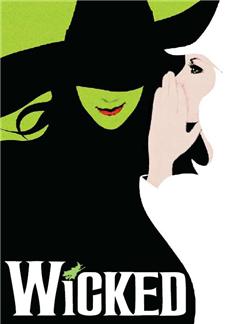 We went to go see the traveling production of Wicked this evening. It's about what the Wicked Witch of the West's real problem was. It's everything people say it is, and if you haven't seen it, you must go.

It's the first week of January, and the crowd at the gym has picked up a little bit. Not much; unlike in Houston, where the gym empties out by Thanksgiving and you're on a first name basis with everyone during the month of December, here the arrival of cold dark days means that the cardio room starts getting crowded right after Thanksgiving. But I did see a guy today driving around the parking lot, looking for a space that was closer to the door. "Won't have to worry about him taking up locker space after March," I thought.

2009 is the bicentennial of Louis Braille's birth, and the Callahan Museum here in Louisville put on a big birthday bash today. The program started with a brief biographical sketch of Louis:

(The Braille system was not universally accepted in this country until well over 100 years after Louis' birth.)

Michael McCarty, host of the local radio show Sound Prints, discussed typical foods of Braille's day (mainly bread and water) and we were treated to a selection of cheeses and french bread. Then one of Louisville's premier chefs, Chef Anthony Dike of Le Relais, served his coq au vin and discussed French cooking at his restaurant. The snack was finished off by a slice of King Cake. CVH was particularly impressed with Chef Anthony's Le Creuset Dutch Oven ($240 at Bed Bath & Beyond). For our Louisville friends, note that Chef likes the cheese selection at Lotsa Pasta.

After the food, Louisville Public Library Assistant Librarian Kathy Szinnyey explained how she learned braille as a child and how clever Louis' method of arranging the dots is to a blind person. Then there was a reenactment of the demonstration that finally won over the reluctant administrators to the braille system: a volunteer read a sentence to Kathy, who recorded it on a piece of braille paper with a stylus. Then a person is brought in from outside the room who reads the braille and accurately translates the dots.

The program wound up with several clips of French music, including of course, Le Marseilles.

Lunch at the Red Pepper

Today we had lunch at a well-renowned local Chinese restaurant that we hadn't tried yet - Red Pepper Chinese Cuisine. The Sichuan chef here is certainly doing wonderful things in his kitchen. And it's the kind of place where they offer the real Chinese menu to gringos and the menu even has English translations (although some of them seem to have lost something in the process - "Unique Chicken Smell"?). I opened the Chinese menu and my eye immediately went to the 冬菜扣肉 - the steamed pork belly with preserved Chinese vegetable. CVH chose the 罗汉斋 - mixed vegetables. When I ordered the pork belly, the waitress wanted us to be sure that the pork would be fatty. We told her that it was our first visit, and we were willing to try it. Unbeknownst to us at the time, when the waitress took the order to the chef, he told her that she should have had us order something else, and sent us a complimentary dish of something that he thought might be more to our tastes: 龙抄手, or Dragon won ton. The won tons were indeed to our taste, and were dripping in a delicious, but not too hot, pepper sauce that had clearly been made on site.

The seasoned steamed pork belly slices showed up and were a delightful contrast to the light, clean, fresh taste of the mixed vegetables (also in a sauce that CVH thought was the chef's own). A delicious lunch was had by all, and I highly recommend this restaurant to any of my Louisvillian friends who are looking for Sichuan cuisine. We're definitely going back to try the Unique Chicken Smell, 孜然羊 (Cumin Lamb), and the 榨菜肉片汤 (Pork Soup with Pickled Mustard Greens)!