Fire up the Tardis, Doctor!

I was poking around in some really old backup directories this weekend, looking for some old VB6 code for Rusty, and I came across a web site that I had built after we visited Washington, DC ten years ago. Put the whole thing together by hand. I think I used Notepad.

For the time being, I've posted it here.


Categories: Things You May Find Interesting

This isn't going to be the most exciting blog entry, but a few months back, I was looking at our twenty-something year old two quart saucepan and thinking "It looks like it's about time to replace this thing."

The two quart saucepan is the daily workhorse of our kitchen. I estimated that one had been used over five thousand times, and it looks like I can still get about $15 for it on eBay (it's a Magnalite Professional; no longer made and desired by collectors). 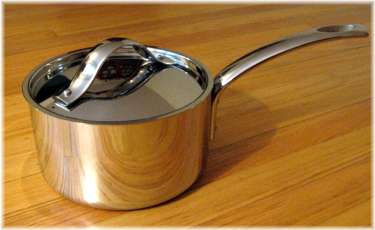 We went to the gourmet store, and they had some nice Viking pots, but they didn't have the two quart in stock. So we went to the department store, and when CVH saw the Gordon Ramsay display, well, it was all over. It was one of the few collections that had metal lids (glass lids are apparently all the rage now, but we think they look prissy, and we dropped one once) and was reasonably priced (there's also a Gordon Ramsay copper collection, which I'm sure is wonderful, but we didn't want to pay extra for something that we'd be spending all our time cleaning - remember this is our every day pot). The sales people at the store assured us that eating food cooked in one of Gordon's pots will not make us curse like Gordon. 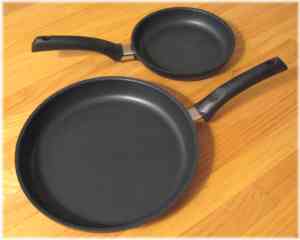 We did get a couple of nice German saute pans at the gourmet store, though. They're non-stick; they told us that the non-stick coating these days is welded onto the pot so that it won't flake off like the old sprayed on Teflon stuff. CVH is already cooking up a storm in the kitchen!

CVH and I celebrated Valentine's Day this year a couple of days late for a number of reasons: the ice storm early in the week, we both weren't feeling well, memories of horrible restuarant dinners served on the 14th proper, and so on. So we waited until Saturday for a dinner and show (actually a show and then dinner). 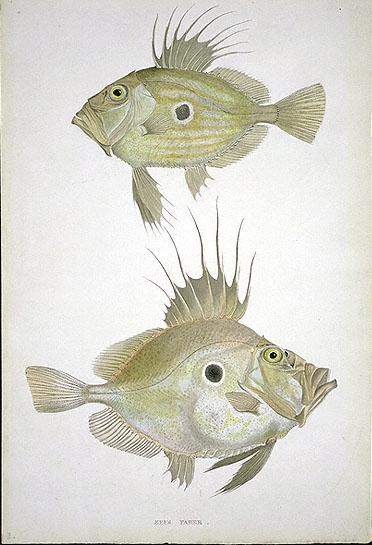 We went to the Actors Theatre production of The Clean House. It was a play about a sad, messy (not clean) situation riddled with humourous jokes. It reminded me a lot of Albee's The Goat, or Who is Sylvia? in this regard. The venue is in an old bank building, and the theatre is excellently designed - not a bad seat can be had. Afterward, we walked over (no, it's not always that cold here) to Vincenzo's for dinner. The menu seemed a little limited, based on what we'd heard, but we later found out that because we'd gotten there early (the play was a matinee), we'd gotten the "theater menu", designed for folks who have to get the the show by eight. We had a tortellini alla maestosa appetizer that reminded me how long it had been since I'd had wonderfully good fresh pasta - it was superb. We split a John Dory and scallop entree with a fantastic eggplant caponata (I know is sounds a little odd, but it worked very well). It came with a fancy little roasted potato, and green beans that had a heavenly taste; CVH thinks they put truffle oil on them. The service was good, and the evening ended on a humourous note: when the waiter brought the credit card slip, he gave me a "Golden Corral" pen to sign it with.

All the leaves are brown...

And the sky is grey

I've been for a walk on a winter's day

Actually, yesterday was quite sunny, with temperatures in the fifties, and today started out the same, so I decided to go to Otter Creek Park, and retrace my hike of last June with CVH this time.

However, by the time we got there, clouds had moved in, and the sky was indeed grey. We walked the Valley Overlook Trail, and overlooked the Otter Creek valley. 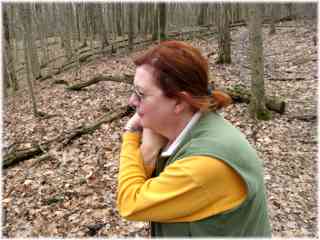 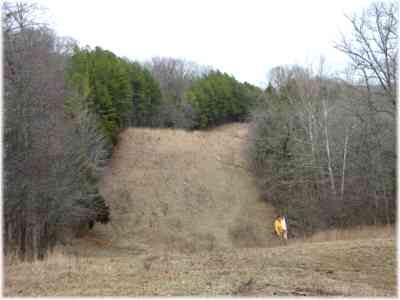 That yellow dot is CVH on the last leg of the hike.

As I mentioned in the previous post, we're taking Becky for obedience training at the Kentucky Humane Society. We had tried this once before in Houston when she was a puppy, with pretty much disastrous results. Now that she's a little older, and a tiny bit calmer, we decided to try it again.

This course has only three other dogs, and the trainer has two volunteer helpers, so there's a lot of individual attention. 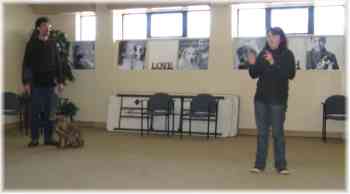 Here Becky and I are listening to instructions from the trainer, Ursa. Yes, it's an unusual name, and if you don't know any Latin, look it up.

It's interesting that the other three (adult) dogs all have some terrier (or terrorier, as we like to say) in them, just like Becky.