I flew out to Denver this week to make a sales presentation. They say Denver is sunny over 300 days a year, but I guess they have about sixty cloudy days left, because they sure used two of them while I was there. I did get a brief glimpse of a snow covered peak from my hotel room:

I was a little surprised at what the Denver surroundings look like. Driving in from the airport, it is very flat, arid, and empty; you see the downtown buildings way off in the distance. It's much like what it was like driving into Dallas from DFW twenty years ago (except Denver has all these huge snow fences along the freeway). And when you get to the city, it is surprisingly dense, almost like an East Coast city. Not sure why everything is cramped together like that when there is so much space available just outside the city, but judging by the fact that nothing is growing there, I suspect that water rights has something to do with it.

Today we went to the Greek Festival. The newspaper reviews of last year's festival were gushing, and CVH was looking forward to this all week long. Plus the paper said parking was free!

When we got downtown, we found that parking was not free, but I had been skeptical of that in the first place, and was prepared to pay my five dollars anyway. The festival was at the Belvedere. "Belvedere" is a generic architectural term used to name many pretty places in the world, and ours is seven or eight acres of mostly grassy park on top of a parking garage that overlooks the Ohio River. It's home to a large number of Louisville festivals, including Abbey Road on the River. When we got to the festival site, we saw that it took up only a small corner of the Belvedere; there are apparently not that many diaspora in Louisville.

Nonetheless, the food was delicious (if not exactly healthy). Volunteers at the Greek Orthodox Church had put in many, many hours preparing the traditional Greek dishes, and they tasted homemade indeed.

We got our food, and sat down to listen to the band. They played while children danced traditional dances. I'd hoped to get more photos, but it started to rain, and we high-tailed it back to the car. It rained the rest of the weekend, a much needed rain indeed, so we did inside things. We did get to a GFS grocery store where they sell restaurant-style food items: gallon jugs of chili powder and the like. It was more interesting than it sounds; while we were there, a woman in a restuarant uniform came rushing in, picked up ten pounds of shredded cheddar cheese, and headed right back out. Definitely the place to go if you're throwing a big picnic or have a couple of teenagers at home, as the prices were very reasonable.

Today I visited Otter Creek Park for a woodland hike. Otter Creek Park is a city park celebrating its 70th birthday this year, which means it's not one of Louisville's "classic" parks, but it isn't exactly a recent acquistion, either. It's a fairly large park, about 2600 acres situated between the Ohio River and Fort Knox. It's a bit of a drive from our house, but I hadn't been there since the winter, and I wanted to see what it looked like all leafed out.

I decided to hike through the woods to the high (240 feet) bluffs overlooking the Ohio River and the farm valleys on the Indiana side. I was surprised at how quiet it was; the only people I saw during my entire hike were two mountain bikers and a women's cross-country team. The cross-country team was putting in some serious mileage, as they passed me three times. And they were talking the whole time! That's aerobic conditioning. The bucolic noises of the forest, however, were periodically interrupted by whumps, booms, and rat-a-tat-a-tat-a-tats from Fort Knox.

I did see a raccoon, one of Kentucky's murderous deer, a female wild turkey, and a turtle. Only the turtle sat still long enough for me to take a photo.

After about an hour, I made it to Piomingo Bend, an overlook of the Ohio River. When John James Audubon lived in Louisville, he got on a horse and rode out to this same point. It took him all day, and he noted that a giant flock of passenger pigeons had flown overhead the entire time.

When I got there, I didn't see any passenger pigeons, but I did see that the bluffs were littered with dozens of large downed trees. In 2004, a tremendous storm came roaring out of Indiana across the plains that you see in the backgroud of the photo, and slammed into the hillside. As a consequence, right now one has a pretty good view of Piomingo Bend, even in the summer time. In another few years, though, that will no longer be the case as the scrub brush grows up in place of the trees.

There were a lot of blackberries that look like they're going to taste very good - next month. And if anyone ever figures out how to make oil from poison ivy, Kentucky will look like west Texas in no time. 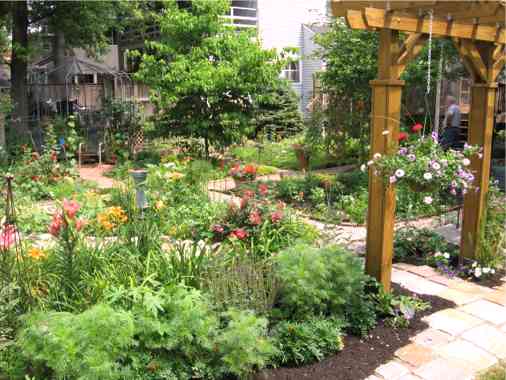 Today we enjoyed the Crescent Hill Garden Tour. The houses in this neighborhood, for the most part, have rather small yards, but they pack a lot into them (see accompanying photo of riot of color). In general, the homes were not as expensive as they are in Cherokee Triangle (which I wrote about on 15 April), but there are some exceptions. The house across the street from the junior high school was listed at a million and half, and it sits on a very noisy cobblestone street. I think they're going to have to find a buyer with a lot of money who doesn't hear very well. The Mayor lives in this neighborhood, and his house was on the tour. It did have a large backyard, and was a fine looking house to boot. 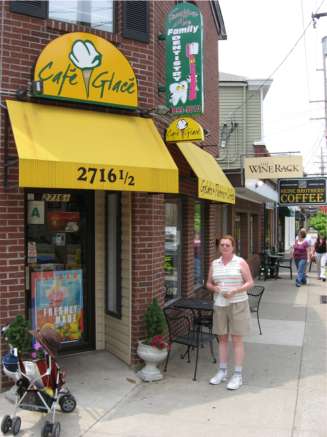 There was a lot of walking involved on this tour, so we stopped for a bite to eat at this gelateria. Note the "1/2" in the address. It was very narrow, indeed. You can see that one of the other customers couldn't even get their stroller in (lower left of photo). We have noticed this behaviour before, and coming from the big city as we do, never fail to be flabbergasted that people leave their strollers on the sidewalk and they're still there when they come back. 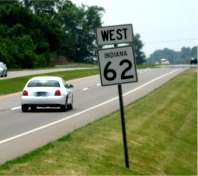 After we left the Herb & Garden Festival, we decided to head on up the road in Indiana to the Berry Best Farm, a you-pick-em outfit, to see what they had. Well, they didn't have much, due to the lousy growing weather we've had here this spring. It got hot in March, there was a late freeze in April, and it hardly rained at all in May. 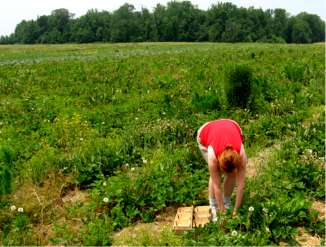 But they did have some strawberries. This is CVH picking strawberries. You've heard of those "jobs that Americans just won't do"? 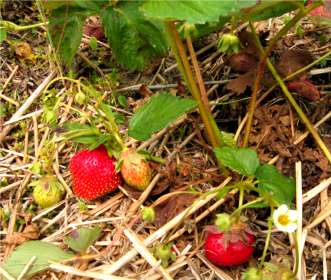 And for you city slickers like me who have no idea what a strawberry in the field looks like, here you go. They are very tasty, and the farmer charged us only $1.75 for a big balsa wood box full. Of course, there was also the fifteen dollars of gasoline it took to drive out there, but it was an experience, and we had a good time. 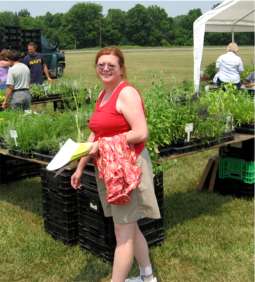 We went to the Master Gardener 2007 Herb & Garden Festival in Clark County, Indiana today. The Master Gardener program is an international (well, the US and Canada, anyway) organization that trains volunteers to grow plants. The volunteers then teach other people how to grow. In Indiana the program is conducted by Purdue University (Purdue has a the biggest Ag program in Indiana). They even have a program called "The Garden Connection" where you can email them gardening questions and the Master Gardeners will answer them.

In addition to lots of herb and plant vendors, there was a blacksmith, a guy carving parrots with a chain saw, and lectures on growing plants. (Wait a minute - I mean the guy was carving parrots out of wood with a chain saw.) There was also a special Herbal Luncheon that CVH just had to partake of. It included a wonderful Cheesy Veggie Soup and Lemon Balm Muffins that were out of this world. All proceeds went to fund scholarships. They had one clever trick to maximize their revenue: after you tasted the food, you simply had to have the recipe, which they were happy to give to you - for fifty cents.

We ended up buying two more herbs for my little garden, and I now have nine different herbs growing out behind the house. They're all doing very well; I attribute my success not to any green thumb, but rather to Pro-Mix, a wonderful potting mix made in Canada. If you find it at your local store, you'll notice that it is by far the most expensive mix that they sell, but you don't have to have anything else, which is great if you don't really know what you're doing in the first place, like me. Just wet it down, throw it in the pot, stick in your herb, and it grows like crazy. It holds moisture very well, and has fertilizer built in. 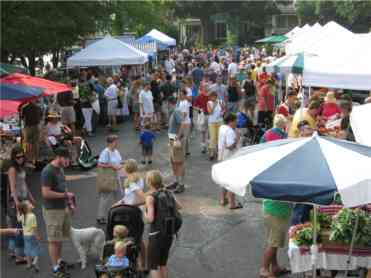 I managed to get CVH out of bed early enough this morning for us to get down to the Bardstown Road Farmer's Market. This is a little market that they set up every Saturday from April to October. It's pretty much in the center of town, so there's a big crowd when the weather is nice, as it was today. As you can see in the photo, they cram a lot of people into a little church parking lot for a few hours. In addition to all the fresh vegetables, there were herbs, jellies, mustards, free range eggs, and some meats (I didn't buy any rabbit). Two places were even serving breakfast, and I'm sure they had permits from the city, although I didn't seem to see them displayed. Several people brought their dogs to the market. Why would someone bring their dog to the farmer's market? I do not know.

We left this market, and went over to an area of town where they advertise another farmer's market. It was in a predominently black part of town, and when we arrived there was only one guy and he was selling barbeque. I got a pork rib sandwich, and it was delicious.

Our last farmer's market stop was across the border, in Indiana. It was very small. So the Bardstown market is our best bet, if we can handle the traffic.