The Niña and the Pinta 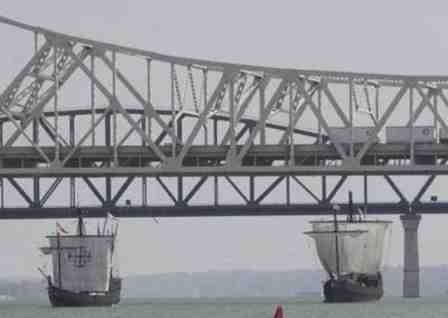 This week a couple of small boats came sailing up the Ohio River to downtown Louisville, and I went to see them after work. They are replicas of the the Niña and the Pinta, Columbus' favorite rides to China. The Niña was built by hand (i.e. no power tools) for the Columbus quincentennial and was used in the movie 1492.

These boats are of the extra-sturdy construction that you find in the absence of proper engineering (in vessels that didn't sink anyway), and I can believe that the originals made muliple voyages across the Atlantic. However, according to the crew's website, travel conditions were possibly even worse than air travel today:

Life on board the Niña in 1492 was not for the light hearted. When the Niña left on any of her three voyages to the New World, her cargo hold was full of provisions, water, armaments. There were live animals ranging from horses, cows, pigs, and chickens. The four-legged animals were suspended in slings as the rolling motion of the vessel would have easily broken their legs.

Needless to say, there was little room below decks for the 27 or so crew to sleep or cook. Cooking was done in a fire box located on decks in the bow of the ship. Sleeping was on the deck and was always uncomfortable as the ship was so loaded with cargo, her decks were always awash. A lucky few could sleep on the poop deck or find a coil of rope to sleep on to keep them off the deck a foot or so.

Life on board improved dramatically when the Niña reached the New World. New fruits and vegetables were discovered which helped to eliminate scurvy and most importantly, the Indians slept in hammocks which the Spanish crew immediately used in their travels.

An evening at the Bernheim Forest


Last night our local "tree museum" and nature center, the Bernheim Forest and Arboretum, held an end-of-summer party after sundown. The new arboretum director is from California and apparently wants to do something different than the usual "save the spotted fern cricket" thing.

Local artists floated fire in the lake and created "found" sculptures. I watched a group of percussionists playing African drums. The local astronomical society set up telescopes to observe Jupiter and other heavenly bodies. There was a person dressed up as some sort of giant bug (cockroach?) while wandering through the crowd. There was a candle labyrinth. The pathway around the lake was dimly lit by tiki torches and solar lights and it gets rather dark indeed out there once the sun goes down. I looked up and the sky seemed to have been sprinkled with salt.

One crowd pleaser was a set of short films projected on a sheet on the woods that showed a woman in a body sock filmed in silhouette as she bent over and assumed an image of an insect. Then the film was sped up as she moved her arms and legs in an insect-like motion. This was accompanied to great effect by an actual insect sound track so that it appeared she was making buzzing and chirping noises.